At this point in my life, Xi’an was in my “Top 3” cities to visit because as the ultimate history nerd, I had to see the Terracotta Army. I was nervous when I finally got the chance to travel there because I had such high expectations of the historic site, but I was not expecting to love the city of Xi’an as much as I did, and I was certainly not disappointed about seeing the Terracotta warriors. Xi’an is a historic city – much more so than modern Shanghai, but it the city itself had so much character beyond the history.

We flew from Shanghai to Xi’an on China Eastern Airlines. The flight was smooth; it only took about 2 hours. The airline served noodles as a meal even though it was a pretty short trip. If you are traveling to Xi’an, I recommend getting a local guide for a day or two while you get your bearings. Plus, you learn a lot about the history and culture from someone who lives there! We had a local guide that was born and raised in Xi’an, and over the course of two days, I learned a lot! Upon arrival in Xi’an, we stopped to see the Ancient City Wall. This city wall is about 8 miles long, has 4 main gates, and a bell tower. In ancient days, no weapon was strong enough to break down a wall, so the city walls were the best form of protection each city had. In fact, many cities in China had large walls (like in Beijing), but during the Cultural Revolution under Chairman Mao, most were destroyed. The city wall in Xi’an is probably the most  We rented bikes and took a spin along the top of the city wall – what a worthwhile experience! Renting a bike was only a couple of dollars (approximately 40 yuan). 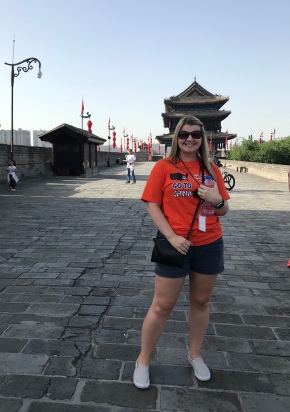 One thing I noticed as we drove around Xi’an was the pristine care and pride the city put into its built environment (flowers, sidewalks, buildings). It was much more beautiful than I imagined. That night, after several days of walking, we enjoyed a reflexology foot massage for about $20 USD – what a treat! I do this from time-to-time at home in Atlanta, but when in China…

The second day in Xi’an was the day I was waiting for. For those of you who don’t know about the Terracotta Army, I’ll provide an extremely brief history and perhaps you will understand why I was so excited:

In 1974, Chinese scientists stumbled on one of the greatest archaeological finds of all-time. It started with the discovery of a clay (terracotta) head, and this led to not one, but thousands of life-sized clay soldiers, arranged by military rank and each having a unique face. The army was said to be “protecting” the burial site of the first emperor (Emperor Qin) of China, buried around 208 BCE in an earthen mound several miles behind the terracotta army. This emperor is credited with (what would become) the Great Wall of China. Since the find in ’74, archeologists are still digging up these clay warriors. For those who are wondering, the emperor has not yet been unearthed because scientists are worried our climate and chemicals will destroy what is buried under the earthen mound. Perhaps one day there will be technology available to safely see inside the emperor’s tomb. The part that is most fascinating about the Terracotta Army is that no one had any idea (before 1974) that it existed. No written records describing a clay army, especially of this magnitude have been found.

When I walked into the archaeological dig site (which is actually a series of buildings), it was bigger and more amazing than I had imagined. It was extremely crowded, even on a weekday, but it was truly spectacular. I had goosebumps the entire time. To get there, you would have to hire a driver or take a city bus to get out to the archaeological site. After a 25-mile drive (which can take a bit of time on a bus), plan to spend at least a half of a day there. There are gift shops and things to spend money on, but I chose to explore with my time instead. Aside from the Great Wall of China outside of Beijing, this should be a must-see on your visit to China.

After our morning with the Terracotta Army, we enjoyed the Tangbo Art Museum. This museum is a fairly small institution costing approximately $11.50 (80 yuan). For those interested in contemporary art, this would be a really unique stop. I also enjoyed the calligraphy and shadow puppet art. If you are taking public transport, Xi’an has a metro and you should get off Yanxingmen Station on the purple line. City buses also drop off near the museum.

One of my favorite parts of Xi’an was the Muslim Quarter (also known as Huimin Jie in Pingyin). The neighborhood dates back to the Silk Road over 1000 years ago. Around 20,000 Muslim residents inhabit this part of the city and the blend of cultures is truly special. If you are a vegetarian, you may want to pack a snack because the main street has a lot of street meat! I recommend roujiamo (beef inside a bun). I also enjoyed watching the shop owners make candy. Taking a couple of hours in the Muslim Quarter to walk around and try some food is well worth your time. One side note, be respectful with your camera. Sometimes I get so excited about capturing the moment, I don’t think about photo etiquette. Our guide suggested that we avoid taking pictures of individuals while they are working because the shop owners are not a tourist attraction…they are just doing their job. He made a good point, so I just took pictures of the area. 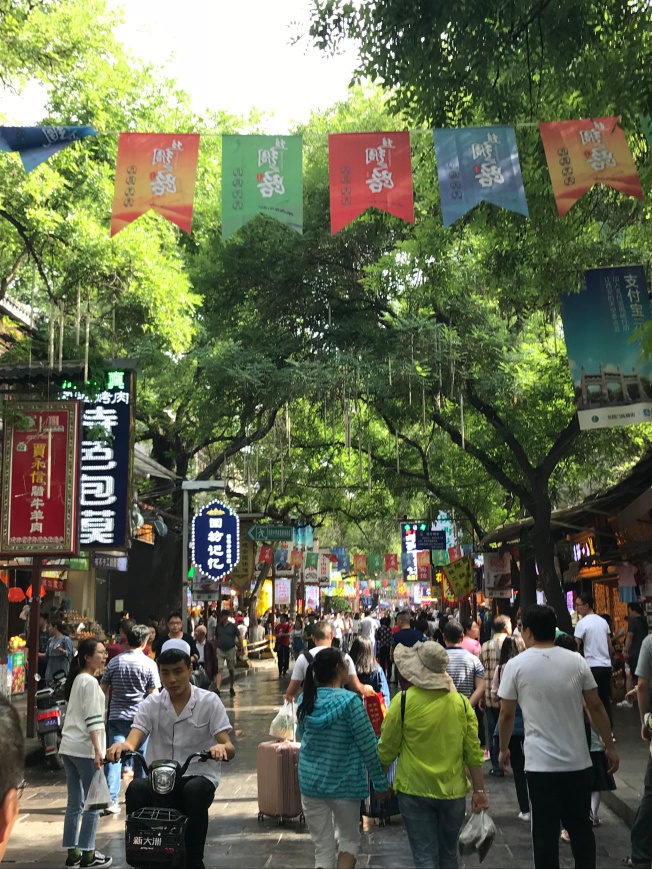 Of all the cities in China I have been to (Beijing, Shanghai, Hong Kong), the one I would most like to visit again was Xi’an. My husband has never been there and I know he would appreciate all of the unique things the City of Western Peace has to offer. Hopefully I’ll make it back before my Visa expires!