My husband, Kevin and I were reminiscing about our 2016 trip to Istanbul, and we decided it was time for another cultural adventure. Since we were also traveling to Portugal on this trip (see previous posts), we determined Morocco was a good destination because it was a fairly quick flight from Lisbon. Plus, I needed to hit up the African continent for the first time!

I will begin by saying Marrakesh is not for the faint of heart. The hustle and bustle was overwhelming at times but was also amazing. Before I begin talking about our experience there are a few things to keep in mind when traveling to Morocco:

Kevin and I decided to stay in a riad in the Medina (old town). A riad is a traditional Moroccan house with a courtyard, and many have been converted into small hotels. We took a pre-arranged car from the airport (that our riad helped us set-up). The car was unable to drop us off right at the front door because the Medina is car-free. Be prepared to arrange for someone to help you find your lodgings and carry your bags (have tip money ready). We were welcomed into Riad RK’s courtyard by a French woman with mint tea and cookies. There was a small pool and several tables and chairs that were available for guest use. We had a private room & bathroom off of the courtyard. Most riad’s are quite affordable – for a highly rated one, we paid $80 a night, and this included breakfast! In addition to the courtyard and room, there was a rooftop terrace with lounge chairs that we used to relax and read. 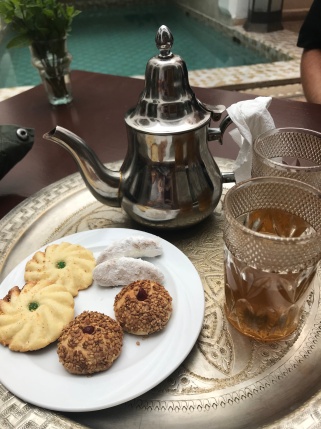 Shopping in the Medina is an experience. There is so much to buy! Walking around the Medina without a guide is a little intimidating and maze-like. Remember, most people are not friendly for free. I’d recommend putting an international plan on your phone with affordable internet service because having GoogleMaps might be helpful! AT&T charges $10 a day for customers to use data, and it would have been well-worth it for us. We got lost going to our first restaurant as it was getting dark (eek!), but we made it and dinner was delicious. The dinner restaurant I’d recommend in Marrakech is Terrasse des Espices. We had food (cous-cous, meat, vegetables) cooked in the traditional tajine. DELICIOUS.

We also spent time walking around the Koutoubia Mosque. It was built in the 12th century and is the largest mosque in the city. The call to prayer occurs 5 times per day and hearing it is neat experience if you have never been to a country that is predominately Islamic. Tourists are not allowed inside, but photographs from the outside are just fine! 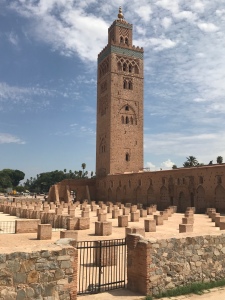 Another highlight inside the Medina was Le Jardin Secret. It is a riad-museum that allows visitors to learn more about Marrakech’s architecture, water, and gardens. Tickets are approximately $20 per person, but it was a wonderful experience. Plan on spending at least an hour there.

The main square in the Medina really transforms at night. The snake charmers, other animal handlers, and juice vendors pack up from their day on the square and the restaurants take over. Lights, food, and people abound, and it is just magical. 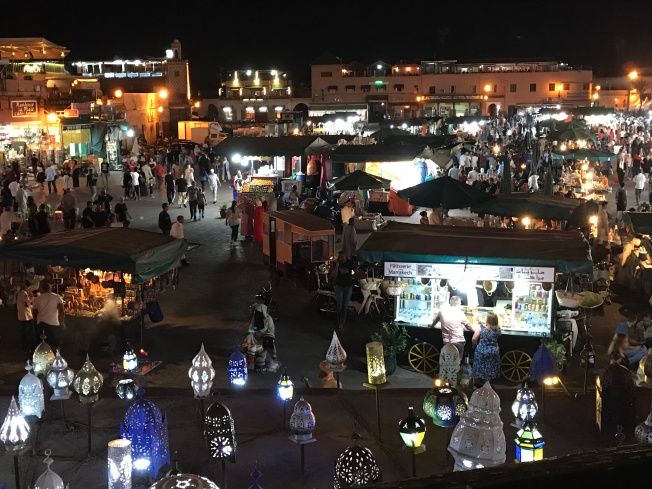 We only spent 2 days in Marrakesh because we had to catch a train to Casablanca for our flight out (Casablanca has a direct flight to Paris on Air France). We purchased tickets at the station in Marrakesh (a negotiated taxi ride from outside of the Medina, arranged by our riad), but English was not commonplace. Even first class tickets left something to be desired (including toilets that opened right up to the train tracks). On this 2.5 hour ride, we saw what a developing country Morocco really is. Upon arrival in Casablanca we only had time for dinner before bedtime and an extremely early flight the next morning. While Casablanca is romanticized because of the Humphrey Bogart film, do not be fooled! Perhaps others have a different experience of Casa, but the pollution was hard to deal with – it was extremely smoggy. Aside from that, it was even more conservative and intimidating than Marrakesh (I did not see women sitting outside at cafe’s), and the taxi drivers were especially aggressive. The only time we have been truly concerned for our safety in a place, was in Casablanca.

Regardless, we were brave and took a taxi to Rick’s Cafe for dinner (from the movie!) and although it is a tourist trap, it was actually a really enjoyable meal. There was live music, 1940s-inspired cocktails, and the decor was lovely. Call-ahead and make a reservation if you are planning to eat here.

Even though I can’t recommend Casablanca, I would absolutely recommend Marrakesh for the adventurers!

Until next time, here’s lookin’ at you kid…