Prague in the Czech Republic is such a delightful place. Why, you ask?

Maybe it’s because the locals drink more beer (per capita) than any other country in the world. Or maybe it’s because of its amusing street vendors and quaint shops. Either way, Prague is a great city; one I’d recommend to folks that are new to visiting Europe. Here’s why:

*Compared to other big cities we’ve been like San Francisco or Hong Kong, Prague was relatively inexpensive – we could get a nice meal and beer (for two) for about $30.

Goulash Stew in Rye Bread-Bowl from our favorite restaurant in Prague: Mlejnice

*English is all around – from the store owners, to the signage, to the tourists, but you still get a eastern European vibe.

*Public transportation (the tram) is relatively easy once you figure out where to buy tickets (go to the newspaper stand!). Walking is also a great option.

Kevin and I arrived in Prague after spending several days in the Middle East. We stayed at the Hotel Century Old Town – our room was clean and simple, and it was in a good location although it wasn’t the best hotel we’ve ever stayed at (which is Hotel Amira in Istanbul, in case you were wondering).

Our first full day we did a lot of walking. so I am glad I was wearing my Birkenstock sandals which happen to be my absolute favorite summer travel shoe! We started by taking the tram to Prague Castle – the largest castle in the world! One neat fact about the castle is that the President of the Czech Republic still lives there. Kevin and I paid the $15 for the audio tour, and I’m glad we had it because there was A LOT to see and hear. Sometimes it is nice to learn some new things while going at your own pace. A highlight within the castle walls was the St. Vitus Cathedral – the Gothic architecture was gorgeous, and it was interesting to see some of the preservation work they were doing there. One thing to prepare yourself for: visitors are charged a small fee if you want to take photographs inside the castle.

Kev and I also enjoyed walking around the gardens of the castle – it was a really nice day and wasn’t too hot for being early June.

After spending the whole morning at the castle we walked around Old Town and walked across the Charles Bridge. It was extremely crowded, but it was good people watching and we eventually came across a great happy hour deal – only a couple Euro for a half liter of Pilsner Urquell!

Our next full day was spent in the Jewish Quarter, also known as Josefov. If you are a history/culture nerd like me, this part of Prague cannot be missed.  Entrance to the Jewish Museum, Cemetery and Synagogues was about $20 a person, and it was walking distance from Old Town. Kev and I learned so much about Jewish life and history, and we really admired the ornate decor of the Spanish Synagogue. 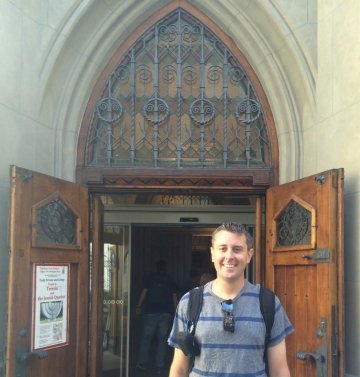 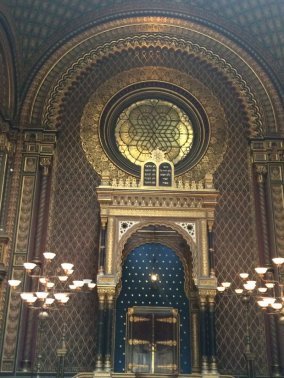 Many of Czechoslovakia’s Jews were killed during the Holocaust, and the Jewish Museum in Prague does a beautiful job of honoring the victims. We did not go, but I really wish we had carved out some time to take a day trip to the Terezin Concentration Camp.

We spent our afternoon taking a boat tour on the Vltava. The trip wasn’t far or long, but enjoying a beer and a mini-architectural tour of the city was an awesome way to spend a couple of hours! We also got some GREAT photographs. 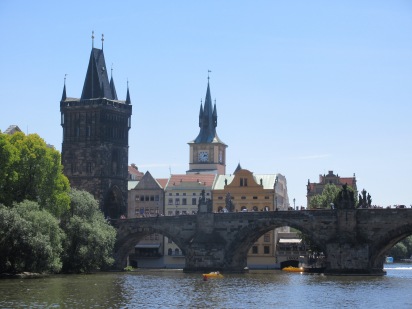 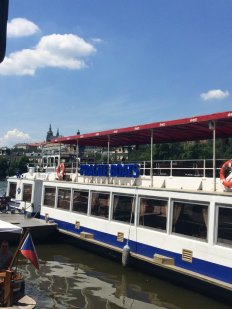 All in all, Prague was a pleasure to visit. Three days was just enough time for us, but there is enough to do for people that wish to stay longer! Prost (Cheers), Prague!